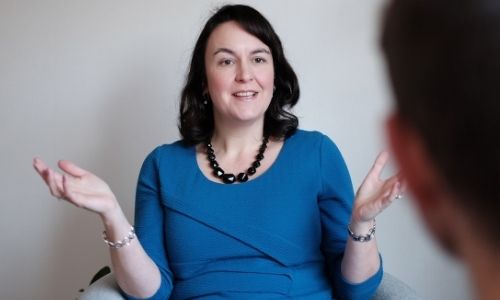 If you’ve tried to talk to your husband about saving your marriage, it may not have gone the way you wanted.   Perhaps he said you were being emotional or that there’s nothing wrong.  Or wasn’t interesting in talking about it.  Leaving you feeling stuck and not knowing what to do.  Because if you can’t talk about your marriage how can work together to save it.

Has this happened to you?  Here are 3 reasons why mums find it difficult to talk to their husband about saving their marriage (and what you to do instead)

This is often how mums describe it to me:

The thing is that when your emotions are running high, it’s more difficult for you to be calm, assertive and explain what you’re upset about.  Your emotions change your tone of voice and the words that you use.  All of which make it much harder for you husband to listen to you and respond in a constructive manner.

This will help you to be able talk to your husband in a calm and assertive way, which makes it much more likely he will listen and you can work something out together.

Talk about lots of topics all at the same time

And so it continues, until they’re telling their husband about a whole list of things that have upset them.

Two things happen for your husband.

Firstly he feels inundated and doesn’t know what to respond to.  There’s so much for him to think about that it’s quite overwhelming and confusing.  And a confused mind can’t work out what to do.

So then the second things happens.  He will either shut down or go on the attack.  He’ll not engage in the conversation or tell you you’re being emotional.  Or tell you about all the things you’ve done that have upset him.

Neither of which allow you to have a constructive conversation and move things forward.

So this is why it’s really helpful to raise one topic at a time.  Resist the urge to reel off a whole list of things.  Stick with the one topic and it will make it much more likely that your husband will listen and you’ll be able to have a constructive conversation.

Talk about what’s wrong rather than what needs to change

Which then leaves your husband trying to figure out what he should do differently.  And there’s a big chance that he will change things – but not in the way you’d find helpful.

Now I get that this can be really hard to do.  Because our brains have a negativity bias which means we notice all the things which are not how we’d like.

But it makes a big difference if you can add this to the conversations you have.  Because it makes it much more likely that your husband will respond in a way that’s helpful.

And this is much easier to do when you use the 24/48 hour rule.  That extra thinking time will give you chance to work out what you’d like him to do differently and how to explain it to him.

So that’s 3 reasons why you’ve been finding it difficult to talk to your husband about saving your marriage (and what to do instead).